The airlines have begun operating at the airports of the Canary Islands during the first weeks of the winter season, between October 29 and November 10 2017, a total of 49 new national and international routes, as reported by Aena in a note of the press.


In this way, the Gran Canaria Airport opened 18 new routes, three of them domestic with Tenerife North, Fuerteventura and Lanzarote, operated by Air Europa with 46, 19 and 20 weekly operations, respectively.
On October 25 the route to Berlin (Germany) operated by Germania with three weekly frequencies was inaugurated. Likewise, on October 29, Eurowings and Niki started their new routes to Munich and Stuttgart, with two and one weekly frequency, respectively.
On Wednesday, November 1, the new connections with Berlin-Tegel, operated by TUI and Germania, respectively, and Nuremberg and Ostersund (Sweden), by Niki and Jet Time, began to operate. During day 2, EasyJet started a new route with Geneva and on the 3rd Danish Air Transport and Small Planet Group debuted their routes with Aalborg (via Faro) and Warsaw.
While on day 4 the routes began to Aalborg, Berlin-Tegel, Hamburg, Goteborg and Lyon, operated by Norwegian, Sundair, Niki, Scandinavian Airlines and Vueling, respectively.

At the Tenerife South Airport, ten new routes were opened. On October 24, Jet Time and Ural Airlines began operating their connections with Vaasa (Finland) and St. Petersburg (Russia). On October 29 and 30, Vueling and Eurowings started their routes to Lyon and Munich respectively.
On November 3, Niki began operating with Nuremberg, while on the 4th Germania, Niki and British Airways began their new routes to Berlin-Tegel, Stuttgart and London-Heathrow. And on days 5 and 6, easyJet and Sundair began operating their new routes with Naples and Berlin-Tegel, respectively.

In Fuerteventura, on October 29, two new routes began operating, one with Nantes and the other with Munich, operated by Ente Air and Eurowings, respectively.
On the 30th, Air Europa started its connections with Gran Canaria, with 19 weekly frequencies, and easyJet started operating with Milan-Malpensa. The 31 companies Brussels Airlines and easyJet launched their routes to Brussels and Paris Charles de Gaulle. On November 2, the Small Planet group began operating the link with Katowice (via Colonia) and on days 3 and 4 Germania and Norwegian started the new connections with Berlin-Tegel and Stockholm, respectively.
In addition, at the Lanzarote Airport, where altogether nine new connections have begun to operate, on October 27, the airline TUIfly Nordic inaugurated a route to Malmo.
On Saturday 28 Brussels Airlines began its connections with Brussels and Air Europa began its domestic connections with Gran Canaria on the 30th, with 20 weekly operations.
A day later, easyJet launched its flights with Paris Charles de Gaulle. On Wednesday, November 1, Eurowings began its flights with Munich. And on days 3, 4 and 5, Ente Air began its connections with Wroclaw (Poland), and Niki with Hamburg and Cologne. And tomorrow, November 11, Volotea starts its links with Nantes, flight that will be received with the traditional water arch and the passengers will be entertained by a folk group and with typical products of the land.
In La Palma, on November 4, the first flights were also received from Frankfurt, Hamburg and Dusseldorf, operated by Niki and Eurowings.
Finally, in Tenerife Norte, the Binter Canarias company started its new connections with Lisbon on October 29 and Norwegian started its direct domestic route to Alicante. And on the 30th, Air Europa premiered its connections with Gran Canaria.

Adeje (Tenerife), the tourist destination with the highest hotel profitability in Spain 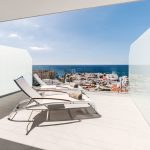