The German tour operator TUI has recognized the Hotel Bahia del Duque 5 star hotel Tenerife with two prizes in its 2019 edition in the categories ‘Holly’ and ‘Top Quality’. The ‘Holly’ award is the highest recognition given by TUI customers to the hundred preferred hotels worldwide.


The ‘TUI Holly’ is a symbol of success in the management of Bahía del Duque and has for it in consideration aspects such as the love for detail, a first class service and an extraordinary gastronomic offer.

The hotel of Compañía de las Islas Occidentales has also won a prize in the ‘TUI Top Quality’ category, which recognizes those hotels that had at least a score of 8.7 out of 10 in the survey conducted by TUI on customer satisfaction.


All the establishments that received this award were evaluated through a survey conducted over the year among more than half a million tourists. The German tour operator TUI has been recognizing the best holiday hotels in the world since 1994 and is a reference of quality and confidence.

The delivery of the prizes of the 2019 edition will take place in an act in the first quarter of the year.

Bahia del Duque owns the podium in south Tenerife when it comes to location. Offering direct access to the Playa del Duque beach promenade via tiered, lawned gardens, this mini-village in the upscale area of Costa Adeje lies a flip-flop stroll from swanky shopping. Golf is very close at hand (two courses within a 10-minute drive), and airport transfers require little more than a 15-minute dash along the motorway.

Modelled like a 19th-century Spanish colonial village, each pastel-pink and honey-toned building on the resort is said to represent an architectural landmark within Spanish territory. This nod to national pride is reflected in the room décor and several of the restaurant menus. From the first greeting by traditionally costumed bell boys, there’s no hiding from the fact that you’re in for a Canarian experience; gazing around the domed Albert Hall-size atrium at check-in lets you know it’s going to be an impressive one at that.

The solidary face of the Adeje Farmers Market, Tenerife 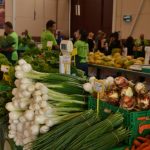 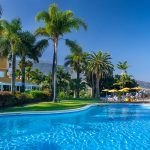