The entrance of a mass of warm air from Africa triggers the thermometer in the Canarias Islands. Weather raises the orange warning today and tomorrow expected improvement. Second heat wave this summer in the Canary Islands.


Temperatures will rub 40 degrees in certain areas of the archipelago and will only start to fall next Sunday, although according to the State Agency of Meteorology maximum will remain very high. In fact, the Aemet has issued a special notice by the heat affecting the Islands since yesterday and raises even notice the orange level high temperatures.

The extreme heat is responsible for the entry into the Canary Islands of a mass of hot air from the Sahara that will shoot thermometers. Weather stations of the islands have already registered this morning temperatures that exceed widely, maximum 39 degrees on average that led to throw that orange notice.

According to the Aemet itself, the three highest temperatures yesterday in Spain have been measured this morning in Gran Canaria: Agaete 43.1 degrees (northwest of the island), 39.1 in Tasarte (west coast) and 39.1 in the Maspalomas beach (south).

The cause of these high temperatures is a warm air mass of African origin that has shifted to the islands with easterly winds existing above about 500 meters. This phenomenon changed the forecast of the State Meteorological Agency, which raised the level of alert in the Canary Islands yellow to orange, which was only set for the south of Gran Canaria. Therefore, the highest temperatures have been recorded and are provided in the interior of the islands, points Meteorology. On the coasts, “due to prevailing northerly winds and the effect of breezes, temperatures are still somewhat lower, although in some parts of coast due to local effects, temperatures are also being exceptionally high, as in the south coast and southeast of the islands, “the Aemet.

Throughout today, as highlighted by the State Meteorological Agency, a slight decline is possible, but probably still remain very high in all areas. Specifically, mercuries reach higher temperatures in the middle of the day, ie from 12:00 to 18:00, with a maximum of 37 degrees Celsius.

To the wind, in the archipelago it will be the Northeast, although it will blow east or southeast into mediocrities, and will be weak in the rest.

The situation will allow a break tomorrow because Meteorology announces a widespread drop in temperatures in the archipelago. However, since the forecast is to remain high, the Agency maintains the notice, although lowered to yellow, both south and interior of Gran Canaria, which will continue bearing the brunt, as Tenerife areas.

In addition, the focus area of La Palma also remain in yellow risk level, situation which is pending the canary Executive and the population as it is in that area where the fire started last Wednesday remains active.

The Ministry of Health, Government of Canarias remember, to rising temperatures recorded during this weekend, the need to take measures to prevent possible adverse effects of heat on health, especially among the most vulnerable groups: people elderly, children and chronically ill. The Directorate General of Public Health of the Canary Health Ministry is insisting that one of the key measures is to drink more water, regardless of the type of activity being carried out, and not wait to be thirsty. In elderly and chronically ill should be done at least every hour to avoid dehydration. These days the night temperature increase is expected, which may disturb the rest altering sleep. It is important to prevent proper ventilation of the room, leaving doors and windows open generating some power to prevent sauna  effect.

To generate freshness can be placed wet towels next to the bed, and even slightly wet sheets before going to bed. One of the most effective in improving the thermal sensation methods is to use water nebulizers or fans, since the evaporation of the freshening generates room. Another alternative method involves placing a container with ice in front of the fan, the health authorities said in a statement. Generally speaking, these days with high temperatures forecast should avoid drinking caffeinated beverages, alcoholic or sugary.

In addition, avoid eating large meals and not readily prepared to contamination (such as salads, mayonnaise, etc.) and choose a diet rich in fruits and vegetables (with caution washing before consumption). For the most vulnerable groups, including children, the elderly or patients with chronic disease are the hot days it is better to stay at home, or better arrange on the street early in the morning or late hour . Always outside the times when sunlight reaching the planet more vertically, ie from 12:00 to 16:00 hours.

We must also sunbathe gradually and cautiously (start with sessions of 15 to 20 minutes and increase without exceeding exposures than two hours), giving us a dip more frequently and always using sunscreens with an SPF of at least 15. Children under three years should not sunbathe. It is important to reduce physical activity, but the people doing outdoor sports when heat is excessive should perform them at early hours or late in the day. If you finally have to leave home protected with hat and wear comfortable, loose clothing if despite these preventive measures symptoms of disorder give heat, collapse dizziness heat, it is recommended to cool off with a sponge or wet towels, take a bath if there is no dizziness, no alcoholic drink fluids fresh and if the symptoms do not subside, seek medical help as soon as possible or through the 112 emergency phone. 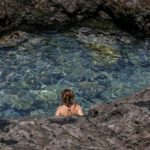