After a lot of illusion and nerves, the Carnival oven crowned yesterday its Queen of 2016. The candidate first in going out to the stage managed to convince the jury and rose yesterday evening with the scepter. The representative of Opinion and McDonald’s, Cecilia Navarro Arteaga, was chosen as sovereign of the Holiday of the Mask with the fantasy white Sand of the desert, work of the designer Daniel Pages, in which they were predominating over the white and golden colors. Three presenters simultaneously pronounced the name of the lucky one, accompanied by a big applause of the public. The young woman received the hand award of the mayor, José Manuel Bermúdez, and of its predecessor in the carnavalero throne, Adtemexi Cruz. Very moved, her from yesterday evening Queen of the Carnival of Santa Cruz did not stop smiling during its coronation. Also, the designer and its team could not suppress the happiness signs either. The maximum representative of the Venezuelan Canary Hearth also wanted to deliver a memory to the sovereign one proceeding from the Eighth Island.


The jury designated like first lady of honor Flavia Martínez Álvarez, whose design also was a work of Daniel Pages, whom with complete certainty him it will be difficult to forget yesterday night after achieving two first prizes. With the fantasy Eva, represented Autoislander Citroën. The titled fantasy of Santi Castro Desde Italia, shown by Priscila Medina, in Radio representation Club Tenerife and Shopping center Añaza Carrefour, she was elected the second lady, while the third one relapsed into Tamara Siverio, representative of the Group Fedola with the design I feel beautiful, of Alfonso Baute. Finally, the court of honor of the queen was completed by the fourth lady, whose title relapsed into Estefanía García Martín, with the design Between the good and evil, of Antonio Santos Arteaga. Its sponsors were Spectacles Bravely and Chain Meliá Hoteles.

As final brooch of the Gala of Election of the Queen the group Ni 1 Idiot’s Hair took the stage to interpret the anthem of the holiday, Santa Cruz in Carnival, in an ambience invaded by the confetti and the applauses. As soon as there was chosen the court of honor, headed by the sovereign piece of news, the acts of the Carnival they move to the street.

Canaries only region where price rises of previously owned homes 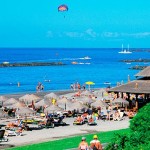