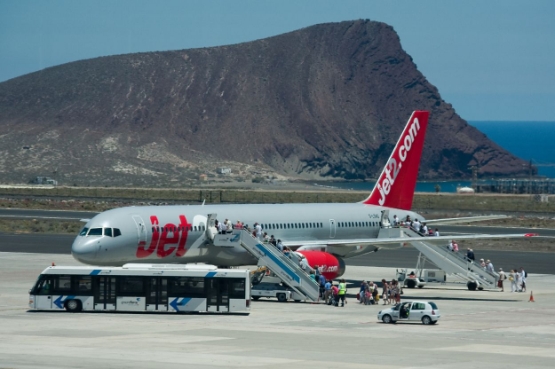 Tenerife has two airports, the busier international airport in the south (IATA: TFS, ICAO: GCTS) is “Reina Sofia” and the airport in the north (IATA: TFN, ICAO: GCXO) is “Los Rodeos” located in the municipality of San Cristobal de La Laguna and more commonly used by Spanish and Scandanavian services.


Tenerife South Airport is located in San Miguel and Granadilla de Abona and was opened in 1978 by Queen Sofia of Spain, whom is dedicated the Tenerife airport. Tenerife Airport was built as a consequence of North Tenerife airport did not meet the technical conditions sufficient due to weather in the area.

Tenerife South Airport lies in the south of the island in the heart of the tourist area, about 60 kilometres from the capital, Santa Cruz de Tenerife.

By car: direct access to Tenerife South Airport from the TF-1 motorway, which links Santa Cruz de Tenerife with the south of the island.

Where to buy a TITSA bono at Tenerife south airport

The first aircraft landed in Los Rodeos in 1929, the terminal is completed in 1943 and in 1946 it opened to traffic. The airport became the main gateway for tourists, also being essential for the islands´ communications. It has been modernized several times to adapt itself to the changing needs of users and aircrafts. In 2010, they moved just over four million passengers, almost sixteen thousand tons of cargo and 61.000 operations.

Journeys in kilometres on the Tenerife