Tenerife expects to close the year 2017 with the highest number of visitors of all time, as has been advanced Cabildo president Carlos Alonso, who said that the island could end 2017 with more than 5.7 million lodged, which means to return to exceed the record numbers of visitors from previous years.


The president stressed that Tenerife “continues to show its strength as a tourist destination because it continues to increase the influx of visitors to the island despite the recovery of competing destinations like Turkey, Egypt or Greece.”
The insular tourism councilor, Alberto Bernabé, said that tourism results reflect the reinstatement of the hotel supply that was undergoing renovation, especially in the north, which attracts new tourist flows that are reflected in the housing data.
Between January and September, the island has housed a total of 4,301,221 tourists, 2.1% more than in the same period of 2016, with positive figures for both hotel establishments (+ 1.6%) and non-hoteliers (+ 3.2%).
Regarding the behavior of the main issuing markets, Tenerife has accumulated a total of 3,333,715 foreign residents from January to September, 1.8% more than in the same period last year.
If foreign issuers are taken care of, the British market registers until September a total of 1,587,261 housed, an increase of 2.2 percent with respect to the previous year. The French market (+ 8.4%), the Belgian (+ 1%) and the Irish (+ 13%) increased.
The balance of the Austrian (+ 8.7%) and Swiss (+ 2.2%) or East European (+ 11.9%) markets is also positive. In addition, the Nordic markets recover, which grow by 2.5 per cent in the period.
By contrast, the German market, with 452,382 tourists staying, is down 6 percent. The influx of Italians (-5.4%), Dutch (-0.8%) and Russians (-7.4%) was also reduced.
In terms of national tourism, it increased by 3.3 percent in the first nine months of the year to reach a total of 967,506 Spanish lodgers in tourist establishments on the island.
From January to September, there were 31,816,808 overnight stays in Tenerife, practically the same as in the previous year. The average stay on the island in these months is 7.40 days on average, about -0.16 points less than in the same period of 2016. As for the housing occupation from January to September, it reaches 73 percent , 0.5 percent lower than that of 2016.
In the analysis of the main tourist areas, the South of the island increased by 0.2 percent the number of housed, with a balance of 3,256,252 tourists, while the situation of the North reflects an increase of the influx of customers housed in tourist establishments of 9.8 percent for a total of 830,310 tourists.

The number of accommodation in Tenerife in September 2017 amounted to 484,267 tourists, up 4.7% on the same month in 2016, with increases in both hotel establishments (+ 3.6%) and non-hoteliers (+ 7%).
September recorded 3,461,240 overnight stays, a figure 1.4 percent higher than the same month last year. The stay was 7.15 days on average (-0.23 points) and occupancy in the island’s residential establishments remained practically stable, with a rate of 71.7 percent (-0.2%), .
The increase in national tourism (+ 3.3%) stands out in the month, with 117,275 Spanish households but, above all, Canary Islands tourism grew by 11.7%, with increase of residents in Tenerife (+ 6%) and an important influx of customers from other islands (+ 24.9%) favored again by the increase of the subsidies to residents in air and sea transport.
Regarding foreign tourism, in September, 366,992 international tourists visited Tenerife, 5.1 percent more than in the same month of 2016.

The port of Santa Cruz de Tenerife receives the visit of six cruisers with 17,000 people on board 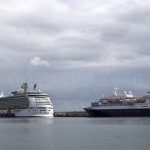 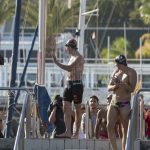