International tourists grew 8.3% in the Canary Islands in the first eight months of the year 2017, compared to the same period last year, with almost 9.3 million, making it the third Autonomous Community, according to the Survey of Movements Tourist in Frontier (Frontur), spread by the National Institute of Statistics (INE).

Only in August, the increase was 4.9%, with a total of 1.1 million visitors, and by countries of origin, the British predominated (42.7%) followed by Germany (18.4%).
Spain received more than 57.3 million foreign tourists until August, an increase of 9.9% over the same period in 2016.
In August, 10.4 million international tourists visited the country, 4% more than in the same month of the previous year.

From January to August 2017, the United Kingdom, the main market for tourists to Spain, recorded a rise of 7.8%, with more than 13.2 million visitors.
It was followed by France, with about 8.4 million international tourists, an increase of 1.8%, and Germany, which grew by 7.2%, to 8.2 million visitors. 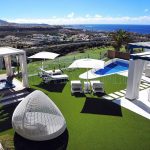