The Department of Sustainability of the Coast and the Sea invest 3.3 million euros in the renovation project of the San Blas beach, in the municipality of San Miguel de Abona. As she published by the Official Gazette of the Province (BOP) remodeling both the performance of this coastal area and the environmental impact study will be submitted for public information for one month.

This is a rehabilitation project that both the municipality and entrepreneurs in the area carry demanded for years. As recorded by the Plan for Modernization, Improvement and Increase Competitiveness of San Miguel, the beach of San Blas has an area of 200 linear meters and 5,500 meters of dry beach, but now has the right conditions for the bathroom what it is necessary to undertake design works and everything you need to create a suitable beach for use.

The Department of Sustainability of the Coast and the Sea invest 3.3 million euros in the renovation project of the San Blas beach in San Miguel de Abona

The acting in this coastal area includes a maritime work, which will focus on the construction of a semi-submerged dike to prevent currents and the adequacy of the beach, replacing the pebbles of sand. On the other hand, land work, where a promenade, access to the coast and entertainment areas, as well as environmental measures are included.

The City Council also expects revenues through different services to be installed in this area which written off the investment, rentabilizarán use and help pay for the maintenance of the beach, the Consistory figure at 90,000 per year.
According to the calculations in the Modernization Plan, the City expects to receive more than 400,000 euros a year thanks to the exploitation of beach services, funds that would be obtained through the rental of 300 hammocks, 150 umbrellas and six water scooters and the concession of two kiosks and a terrace bar.

The Consistory expected before the end of this legislature is undertaken the project, as they ensure that they have the commitment of the Cabildo of Tenerife to carry out work without waiting for state funds.

This is a project that takes several years late and who began promoting in 2001. It was not until 2006 when Costas decided to separate the project into three, committing to the financing of the maritime part, but finally, one year then it decided to assume full funding of the work.

The Council of Tenerife will finance the creation of a promenade linking the beach with the  Los Abrigos. The performance will cost 1.5 million euros, of which 500,000 is budgeted and face euros this year.
This route will improve the connection between these two urban centers of both municipalities, not only for local people who come to this area, but also for tourists who visit this enclave. 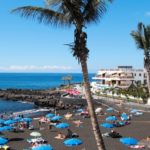