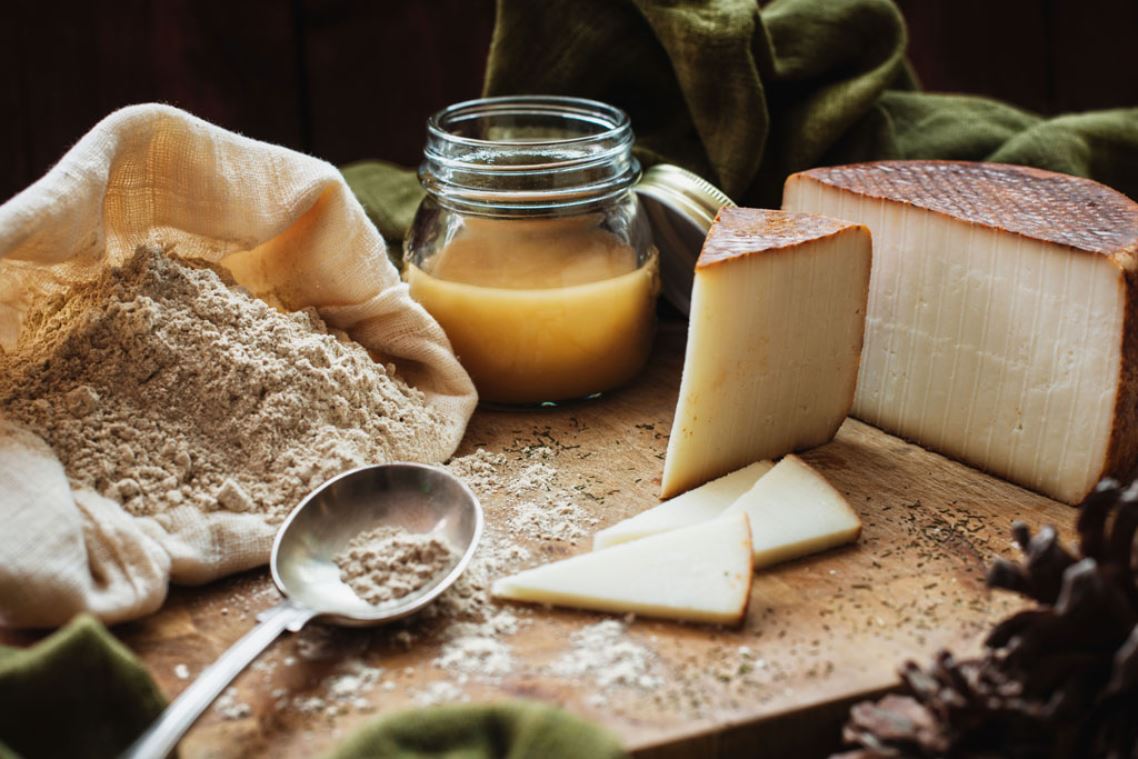 Tenerife agriculture has been historically marked by export crops and agricultural production for self-sufficiency, as sugar cane, vineyards, bananas, tomatoes, cereals, potatoes, horticultural and tropical products. All of them have inspired traditional gastronomy, based on the gofio (coarse ground flour), potatoes, sauces or gravies, cheese, honey, chestnuts, fruits, pastries, wines, spirits and rum. Not to mention the various fish and meat.

One of the most recognized elements of the island cuisine, that comes from the Guanche culture, is the gofio. The “gofio” is made from roasted and ground cereals, such as precooked flour, with a high nutritional value which at other times constituted the basic food of the population.  It is usually eaten accompanied with cheese, mixed with wine, honey, sugar and almonds, blanched in meat and vegetables broth, and pork scratchings, although it is also eaten with milk, sugar and bananas. In Tenerife, the most commonly used variant is made of wheat although it is also made of corn, being the most frequent the one mixed with wheat and corn and the one blended with other grains (barley, oats, sorghum) and leguminous (peas, chickpeas).


No one can understand the island´s cuisine without the consumption of potatoes. These serve as accompaniment to many meat and fish dishes.  The traditional ones are the wrinkled potatoes (boiled potatoes with skin, water and plenty of rock salt). There are more than twenty varieties grown, which have curious names such as: beautiful, torrents, lilies, red, wigs, black, kinegüas, utodate, ranbanas, white round, etc.

The mojos (sauces or gravies), serve as accompaniment to potatoes, meat and fish. There are two varieties of sauce gravy: red, used for meat and green for fish. The ingredients are spicy red pepper for the red sauce, oil, vinegar, garlic, salt and cummin. There are also cilantro and saffron sauces or gravies. To make them milder and not so spicy, sweet red pepper is sometimes used.

As sea snacks, limpets, prawns, gueldes or wrasse, morenas or moreys and burgados or sea snails are served. Salted fish (cherne, corvina) is usually accompanied by “polines” (cooked green bananas) or sweet potatoes (yams). Although, fish is generally eaten either stewed, fried or grilled and is usually accompanied by potatoes. Among them, based on their common consumption, we should emphasize the abadejo, the sama and salem, the bocinegro, the vieja, snappers pargo, the palometas and halibut, among others.

Cheese plays an important role on the table. It is mostly made of goat’s milk and it is mainly consumed as fresh white cheese or unripened form, with an almost nonexistent rind, and slightly acid mild flavor with a moist consistency. Smoked cheeses are also produced with aromatic plants, sheep’s milk cheese and blended cheeses, with a smooth buttery texture, excellent quality and limited production.

The island produces wines of a strong personality marked by the Atlantic island and its volcanic condition. The climatic and topographic characteristics of the island cause a variety of grapes, both white and red, with the Malvasia being world famous. This means that, with the good work our winemakers and winery owners, we have a great varietal of blends.

Finally, we cannot forget the honey as a traditional product, with delicious wildflowers honey, of its coast, plains and hilltops, and honeys from exclusive nectar, such as the Mount Teide broom honey, the bugloss or chestnut tree.

The excellent, Spring-like climate that the island enjoys all year round accounts for the wealth and variety of vegetables that grow here: delicious tropical and sub-tropical fruits like bananas, papayas and mangoes; tasty potatoes, grapes and tomatoes are all fine examples of this. The sea that washes the coasts of Tenerife is another great source of ingredients for island cuisine, in fact it is a larder packed with the most exquisite fish and sea food the Atlantic has to offer.

Gofio is a direct legacy of the original native population, the Guanches. It is a flour made from toasted grain, mainly barley, wheat and corn, but it can also be made from vegetables like peas and beans. Gofio is irreplaceable as a complement to add to the local vegetable stew “potaje”, meat stew “puchero” or fish stew “cazuela de pescado”. It is usually kneeded into a ball and eaten as a starter. It is most widely used at breakfast time, where it is an important ingredient, because it is a natural cereal product that is natural and pleasant tasting, with high nutritional value within an increasingly popular healthy and nutritional Mediterranean diet. It is also used in desserts, mixed with milk, honey, almonds and raisins. In recent years it has started to be used for making spirits, ice cream, nougat and other sweet dishes.

Another of the jewels of the local gastronomy that visitors discover with satisfying surprise are the cheeses of the Canary Islands. Sheep and goats provided the main livelihood for the Guanche people, which explains the cheese-making tradition of Tenerife.

The cheese made in Tenerife, which is of excellent quality and offers complete health guarantees, is generally eaten fresh or matured. One of its most outstanding features is its softness and the particular aroma it gives off to announce its special taste, salty and slightly acid, that is very pleasing on the palate. There are some local cheeses that deserve special attention, such as the cheeses of El Tanque, mature and slightly picante; and those of Arico-Fasnia, Anaga and Teno.

The island’s special vegetation is ideal for making excellent honeys. Maybe the most original one is thistle honey, unique in Europe and a tasty, delicate way to sweeten desserts or to kneed into gofio. Another, somewhat different honey, with an intense, sweet smell, is broom honey. Then there is bugloss honey. This is practically colourless until it crystallises to a white, opaque colour. It comes from the flowers of the Teide National Park.

There is a wide range of honeys. The coastal, ones made principally from the blooms of banana and avocados, and ones from the hills and mountains, made from chestnuts or fennel, are other possibilities that can be tasted and enjoyed at the table. Next to the Wine Museum in El Sauzal, there is a Honey Museum (Casa de la Miel), which produces exceptional and genuine Tenerife honeys.

Vines are part of the landscape in Tenerife, and it is a leading sector of the island’s agriculture. Canary Island wines reached the height of their splendour in the XVII and XVIII centuries, which is when Island trade also reached its height.

At one stage, Tenerife was exporting eleven million litres a year. At the time, famous writers like Shakespeare, Gongora, Scott, Kuprin, Goldoni and Spillman made mention of their admiration for the excellent Canary Island wines in their works. Nowadays, Tenerife has five labels of its own for its wines: Tacoronte-Acentejo, Ycoden-Daute-Isora, Valle de La Orotava, Valle de Güimar and Abona, that, between them bottle more than five million litres a year. The borough of El Sauzal is the site of the Casa del Vino Baranda, an XVII century mansion in which the authorities have created a valuable museum of the wine-producing tradition of Tenerife.

In Tenerife, as in the other Canary Islands, the potato still goes by the original name it was given when it first arrived on the island from the Andean region of South America, “papa”. Potatoes arrived in the Canaries before continuing their spread throughout Europe. The original contact has left an extensive legacy that can now be seen in nearly three dozen different varieties, most of which come from the Andes region, all falling in the category of what are known as “coloured potatoes”.

The humble potato is one of the main allies of the cuisine of Tenerife. It is used in “potajes”, “pucheros”, “cazuelas” (see above) and, above all, served with meat and fish as “papas arrugadas”, potatoes boiled in very salty water and served in their jackets. Some of the oldest known varieties of potatoes on the island, the “papas negras”, only grown in Tenerife, and the “papas bonitas” have a delicious flavour.